Congress Demands A Justification Of Trump’s Syrian Attack Without Permission

The Founding Fathers put very specific rules in place to protect the citizens’ freedoms and to ensure that those in power needed to go through specific channels before they could initiate any foreign aggression or retaliation against another nation. Legal scholars across America, as well as Congress members, are asking whether it was legal for Trump to strike against Syria without first getting approval.

It has been over three weeks since Donald Trump took a stand against the leadership of Syria — after Assad used chemical weapons against his own people — and dropped a bomb on Syrian soil. Although there are very few who would question whether Assad deserved the move, Congressional members are asking whether or not Trump had the legal authority to work alone. 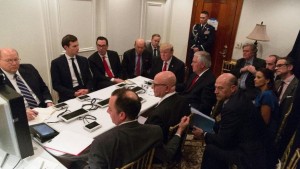 Congressman Adam Schiff from California and Senator Tim Kaine of Virginia are demanding that Trump give a justification of the legality of his actions. They insist that his attack could set a poor precedent for further acts of aggression that could ultimately land America in a war with major powers around the globe. Without even consulting Congress, which is what they state should have been done, Trump overreached his boundaries and made the American public vulnerable to the beginning of a war.

Immediately after the strike, the Trump Administration sent a message to Congress stating that he had a constitutional right to do what he did. Schiff and Kaine are demanding that Congress receive the necessary information to determine whether the actions were appropriate and that they didn’t risk America being thrown into a situation where we would have to put boots on the ground.

The considerations for an attack should not be formed after an act; they should rather be decided upon beforehand with careful and thoughtful insight, and more professionals and legal scholars should be involved prior to taking action. The Congressional members also have concerns that if Trump’s Administration can take such drastic measures against Syria without permission, who is to say that they won’t do the same to North Korea without consulting the proper authorities and gaining consensus?

The only way that a president is allowed to attack another nation without Congressional approval is if the security of America depends on it; at that point Trump would have the legal authority to act without approval. But the attack on Syria was a preemptive strike against another nation for humanitarian reasons. If the same was done with North Korea — who could potentially begin a nuclear holocaust — it would be a much more dire situation. That is why only Congress has been given the authority to do something as major as declaring war on another nation.

Trump’s administrative members continue to defend the Syrian strike in the belief that it was in America’s best interest to show Assad and his supporters that America wasn’t going to sit by and watch him massacre his own people. The administration insists that if America is going to once again be safe and strong, then they must not only draw a line in the sand — as the Obama Administration did — and once that line is stepped over, the administration must back up their words with actions.

The hope is to deter the Syrian leader, and any other leaders around the world, from unleashing evil on those they govern and to stop any further mass chemical weapons strikes. But that alone doesn’t really justify making a move. Since it wasn’t directly in defense of America, however, it isn’t really legal and Trump didn’t have the authority to act alone.

Legal scholars who oppose the strike insist that Trump broke the law because he didn’t have the legal authority to unilaterally make the US vulnerable to a retaliatory strike. When Obama told Assad that Obama would have to take action if Assad gassed his own people and Assad ignored him and did attack, Obama was considering a strike against Syria himself. At that time Trump sent out a tweet stating that Obama should seek Congressional approval before striking — in direct contradiction to what he actually did himself.

But according to law, in 2001 Congress passed a resolution that allowed the sitting president to use all necessary and appropriate actions against any nation or organization that were involved in the 9/11 attacks. Trump could likely use that legal argument in his defense, since both Bush and Obama used it to justify things like bombings in Pakistan and Somalia as well as holding prisoners in Guantanamo Bay. But the strike on Syria might leave many Congressional members with a bad taste in their mouths, which will likely have no legal effect on Trump anyway.

My case was very difficult, I always knew it because I was already in deportation when I contacted the attorney Shawn Meade. He helped me a lot, more than I can say. They wanted to deport me because I had come to the United States unlawfully. I am a single mother and with two young kids I didn't have very many options. After being in court for over two years my final court was coming up and the judge would decide if I could stay or if I had to go to Mexico. Thanks to my attorney Shawn, I got my residence and I can stay in the United States with my children.

I am grateful for my attorney and I like that he is American but is bilingual in Spanish and English. Shawn is a great person and he was very attentive to my case the whole time and everything worked out. Thank you.